Most of June was pretty “hot” by Ukraine standards with the temperatures ranging from mid-80s to mid-90’s. When many don’t have air conditioning it is hot. Fortunately, there is an air conditioner in my apartment that works well! Now our temperatures getting back to more normal with low to mid 70s! I like this much better!


In my last writing I told you about preparing for some street evangelization. Artur, a friend from the Bear Valley Bible Institute, Taras, and our own Sasha took twice to the streets the week of June 17th and handed out a lot of literature and invitations. I wasn’t feeling great, so I directed from home (I’m much better now!). They said that about ½ of the people they reached out to received them well and took literature!


Early on the morning of July 1st, 15 of us, including 5 small children, left for the Amerikraine Bible Camp about a 4-hour bus ride southeast of Kremenchuk, along the Dnieper River. We arrived at camp 1pm. I was very pleasantly surprised to find it more of a Ukrainian resort than many “camps” I have seen in Ukraine with the facilities being very nice! We had our first meeting and devotional at 4pm with about 350+ mostly Christians from across Ukraine! There were 40+ congregations and 4 countries represented at this camp! It was amazing! One of the things that was most amazing to me was that there were over 30 Christians from the Donetsk region that is now held by the occupying forces backed by Russia! They had to go through a lot to get here and to back but they made the extra effort! They are such great people of faith and fortitude! It was such a great blessing to meet them and get to know some of them!


The camp gets its name from Americans and Ukrainians working together to make this great family camp work! Jeff Abrams, a gospel preacher from Alabama has been the moving force behind this camp for 17 years. This is something that the Churches of Christ in Ukraine have needed for a long time – the unity and fellowship for us to know that we are a big family that can love and work together for Christ’s great cause and purpose! It was only about 4 days long, but it was so worth it! I’ll be sharing some pictures with you here in this post. You can also see many more pictures by going to my Facebook page and checking them out there.


Artur will be taking 6 teenagers with him to another Bible Camp in western Ukraine in the Carpathian Mountains. They will leave by train on Sunday afternoon, July 21st and return on July 31st! None of the teens that are going have yet to be baptized into Christ, so pray that this will be a very good learning and growing experience for them.


Now that we are back, we are moving forward with evangelism which centers on outreach through street evangelism and English Clubs and Schools. More to come on the English School as time goes on. Let it be known that the Church in Kremenchuk is moving forward in a very positive way! 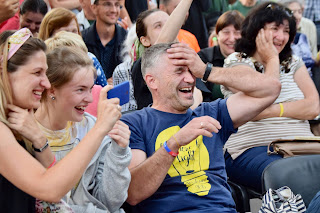 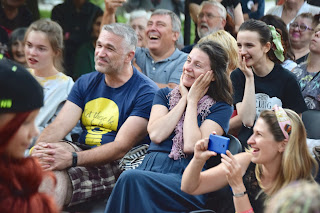 They were all laughing at a skit that Yulya, Olya, Sasha and I put on for the talent night called, "The Bula, Bula King!" 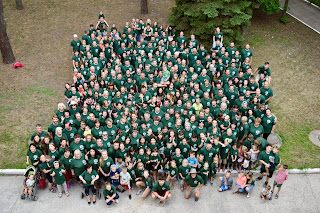 This is a picture taken on Tuesday, with everyone there in their camp t-shirts! 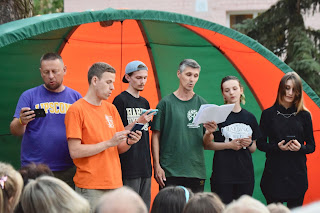 Artur, Marina and other singing a hymn that one of them wrote to the tune of the Ukrainian national anthem! 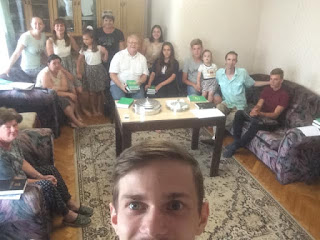 From a recent Sunday morning worship service in my apartment.
Posted by Doug Berry at 2:26 AM No comments: 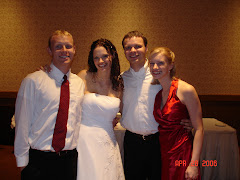